Beyond the prosthetic aspects, such as marginal adaptation, aesthetics or functionality, Implant prosthesis requires paying special attention also to technical aspects and finding the best possible solutions, whether we are talking about individual crowns, bridges or complex rehabilitations with hybrid screw retained prosthetic solutions.

Digital Implant Workflow concept comes with technical solutions in order to obtain implant-prosthetic restaurations adapted and tailored specifically for every single case. With the use of Atlantis products and platfomr, the prosthodontist can have the complete control of his case which he rehabilitates, using the digital platform to obtain the desired design of the prosthetic parts such abutments, structures, supra-structures , crowns, etc., thus obtaining the expected results.

During our lecture, we will present different options to treat implant rehabilitations , using Atlantis solutions. Even if we want to take a classical impression, or we want to scan intraoral with digital scanners we will present different approaches and workflows in different situations, in order to obtain predictable and long lasting results with the use of customised, precise and easy to produce, prosthetic components. 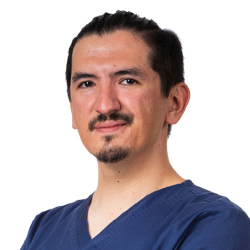 He graduate of the "Ovidius" University of Constanta, practices dentistry and has been part of the Implantodent Clinics team since 2006. He is Key Opinion Leader for Atlantis system - Dentsply Sirona, Key Opinion Leader CAD / CAM for the CEREC Sirona system in Romania since 2011 and user since 2007 also of inLab system.

Member of the American Academy of Dental Aesthetics.

Certification in the Digital Smile Design (DSD) and SKYN Concept.

Speaker at various conferences and congresses in Romania and International on various topics such as: "Integration of digital technologies in dentistry", "Prosthetic aspects for Fixed Rehabilitation of the severe bone atrophy".

Speaker at the Institute of Advanced Implantology.

Prosthetic rehabilitation of patients with total edentations, through the All-On-X and TotalFix implant-prosthetic concepts, but also complex rehabilitations on teeth and implants.