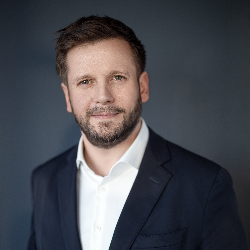 Since 2018, Jean Richard De Latour holds the position of CEO of Carrefour Romania, a company with 18,000 employees that in 2019 achieved a net turnover of over RON 10 billion.
He joined the Carrefour group in 2013, as Studies, Innovation and Public Affairs Director. Over time, he has held various positions within the company, including that of Cabinet Director of the President and CEO of Carrefour Group, for two years.