Who will you trust to switch off your AC on a sweltering Summer day?

We will explore the upcoming changes in our energy system. New cheap solar and wind projects are pushing existing coal and gas plants out of the market. Batteries are rapidly becoming cheaper and finding their place to provide power 24/7. Electric cars are quickly gaining market. Heat pumps are becoming more widespread and we will need more and more Airco’s to keep us cool in summer. Roughly, the electricity market is expected to triple in size by 2050.

What will motivate us to take an active role in this energy transition? Join me and look at other values than the purely economic ones. Think about trust, community, fairness and sustainability.We will look at some business and technological opportunities in the near future. All of them are technically possible right now, but still in the early development phase. Our focus will be on:

Question come up. Will we have lots of small players competing with each other in every national market or are the same network effects valid that rein on the internet where the winner takes it all? Suppose you participate as a household in this market, what kind of money could you make? What does it mean to participate in these markets as a private person What kind of risks would there be for you? Who will control your data and what uses will your data have? Would you participate? 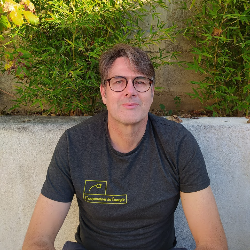 After finishing his Quantitative Economics studies at Vrije Universiteit Amsterdam in 1993, Gijsbert decided to start working in Romania where he set up, together with a local partner, the branch office of Larive a Dutch business development organization.

In 1995 he set up a furniture factory together with his cousin who acted as an industrial partner. This business was grown from zero to 5 m€ turnover in 10 years. Products are exported to almost all countries in Europe. The factory continues to date and currently employs 110 people under local management.

Gijsbert is one of the founders of Som Energia, Spain's first renewable energy cooperative in 2010. He has been involved in all stages of its rapid development. In 10 years Som Energia has grown to 68.000 members, 118.000 electricity contracts and an expected 2020 turnover of 75 m€. Around 90 people work in the office in Girona, Spain with hundreds of volunteers involved at various local support groups around the country. Together the members have invested over 10 m€ in new solar, hydro and biogas projects. Gijsbert resigned as general manager of Som Energia in May 2018.

On a personal level, Gijsbert invested in 2 solar PV plants in Spain in 2012. One plant is an 850 kWp fixed panel plant on land in Juneda, Lleida province. The other is a 620 kWp solar tracker plant near La Granadella, Leida province. Each plant produces around 1.3 GWh per year.

From 2015 some small investments in off grid solar projects were done in India, with later projects in Zambia, Tanzania, Ghana, Palestine and Bangladesh, amongst others. All these investments took place via a variety of local and international crowdfunding platforms. Gijsbert is board member and a (small) investor in Solaris Offgrid, a pay-as-you-go solar company.

In 2017 a first investment in a 70 kWp on PPA project on a hotel Phnom Penh in Cambodia was made followed by becoming a minority shareholder in a small solar engineering company. 2019 saw another PPA project of 102 kWp on the roof of a water treatment company in Takeo province.

The lessons from Som Energia are currently being used in the development of Cooperativa de Energie, Romania’s first renewable energy cooperative of which Gijsbert is co-founder and member of the board. Cooperativa de Energie is preparing to launch its first production projects and initiate the selling of green electricity in the Romanian market in 2021. 322 people from around Romania are members as of October 2020.

Who will you trust to switch off your AC on a sweltering Summer day?